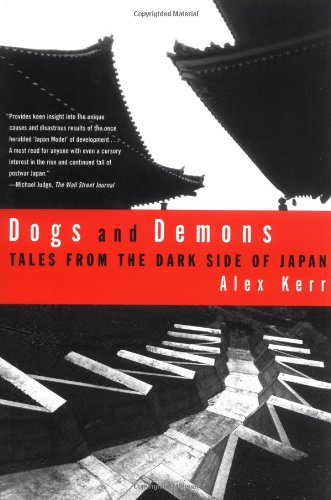 I’d like to talk about “Dogs and Demons: Tales from the Dark Side of Japan” by Alex Kerr.  The author has lived in Japan for more than 35 years, which gives him great insight into the swift changes Japanese society has undergone in that time.  He was the first non-Japanese person to win a prestegious literary award in Japan.

Dogs and Demons: The Serious Issues of Japan

I think most people have a fixed image of Japan, be it from Hollywood films, Japanese comics, or animation.  However, living in Japan as a long-term resident is radically different than visiting and seeing only the surface.  Alex Kerr goes deeper into the fields of construction, politics, education, and more.
Dogs and Demons is an eye-opening look at what really goes on in Japan and sheds light on some of the problems the country is facing or will experience in the future.  The book was published in 2002, so it does not include recent events such as The Great Tohoku Earthquake and tsunami or recent issues with radiation.
Despite that, this book will really explain how many organizations and hierarchies function in Japan. I found myself realizing I had encountered the same kind of situations and ways of thinking as I read this book. It’s not all positive, so be warned. Japan won’t be written as the rosy shades some people see it with, but that’s true of all countries. Every country has problems and Japan is no exception!

I recommend this book to ANYONE that has an interest in Japan.  If you’re currently living or planning to live in Japan, this book is a must-read.  It might solve some of the mysteries you have encountered in your daily life and wondered, “Why is X that way?” Dogs and Demons is available in both paperback and ebook editions.

One thought on “Dogs and Demons: The Dark Side of Japan book review”