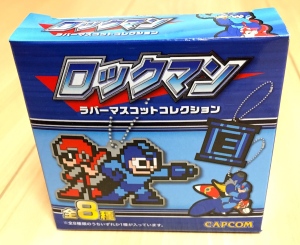 I had gone out of my way to travel to Osaka’s DenDen Town to make a visit to Super Potato, one of the best retro game shops in Japan, only to discover that the store had relocated somewhere else. I didn’t have time to go to the new location, but I didn’t want to leave empty handed, so I spotted a smaller retro video game store and went inside.
I wanted to pick up a little something to take home and that’s when I discovered a small box with 8 bit Mega Man (Rockman in Japan)  on it. Looking closer, it said “Mega Man Rubber Mascot Collection”.  How could I pass up the opportunity? Find out which Mega Man toy was inside the box!

There are 8 different character toys in total, but each box is random. You don’t know what you’re going to get until you open one. This random box system is used for so many different franchises of video games and anime, so it’s not unique to Mega Man toys. I usually don’t pay attention to this kind of stuff, but I grew up playing the original Mega Man games, so I couldn’t say no when I saw it hanging on the wall in the Japanese shop.

I opened the box and out came the original Mega Man and his dog Rush. I think this is the art style from Mega Man 8. It’s not the exact toy I was hoping for, but it’s still good. Where was all this merchandise when I was a kid? I feel like I’m making up for it by buying these things as an adult. Oh well, I suppose that it’s ok because this was only about 500 yen ($5) and not so expensive compared to other Mega Man toys Capcom has released.